It is with pleasure that Chief Bulanow announced the Feb. 2015 Firefighter of the Month, Firefighter Ve Andre Wright.  The award was based on a nomination from Captain John Henderson.  Henderson wrote:

I recognize Firefighter Ve Andre Wright for his dedication and willingness to assist a citizen of North Charleston while off duty.

On January 28, 2015, Squad 202 responded to a restaurant on Northwood’s Blvd for a medical assist with a seizure. Upon arrival, crew members were met outside of the restaurant by the manager, stating that a customer was not breathing.  Squad 202 located the unresponsive victim with no pulse. Crew members immediately started CPR. 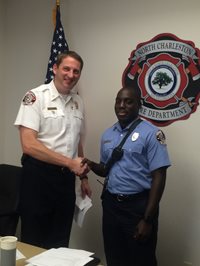 Firefighter Wright, who was working as mall security, arrived on scene and offered to assist Squad 202 crew members.  While Squad 202 was performing compressions, Firefighter Wright assisted with ventilations.  Charleston County EMS arrived on scene and stated that the patient now had a pulse and was breathing on her own.  Medic 9 transported the patient to Trident Medical Center. Firefighter Wright assisted Charleston County EMS with patient care without a second thought.  After this incident, I was notified by Engineer Driggers that Firefighter Wright’s assistance helped make the scene more manageable and helped provide a higher level of care to the victim.  His concern for this citizen and his duty to act is greatly appreciated.

It should be further noted that the patient was released from the hospital within a matter of days and is alive and well thanks in part to the actions of Firefighter Wright.