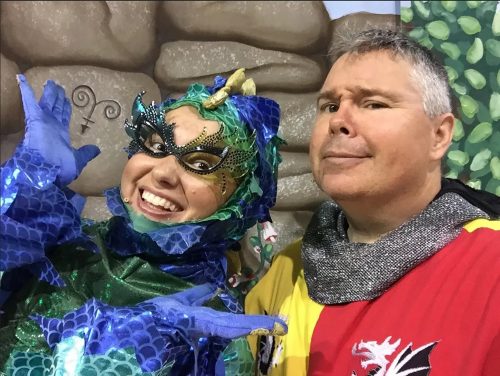 The City of North Charleston’s Cultural Arts Department is pleased to offer the first performance of its 2019/20 Children’s Theatre Series at the North Charleston Performing Arts Center from 10:00-11:00am on Friday, November 15, 2019. Florida based theatre group Atlantic Coast Theatre for Youth will present The Reluctant Dragon, a charming adaptation of the 1898 children’s story by Kenneth Grahame. The program is appropriate for all ages, but best suited for grades K-8. Schools, daycares, community groups, families, and individuals are welcome to attend. Tickets are $2 per child with accompanying adults admitted at no charge. Parking is free.

In The Reluctant Dragon, Sir George is hired to slay a Dragon who is more interested in reciting Shakespeare than fighting. Together, they stage a grand battle for the villagers, and learn to look beyond outside appearances to find friendship.  Filled with humor and audience interaction, the production explores state and national learning standards in literature, theatre, history, and character education.

Central Florida based Atlantic Coast Theatre for Youth, led by education director Noel Holland and artistic director Don Gruel, tours year-round and nationwide, producing imaginative live theatrical productions. The husband and wife team founded Atlantic Coast Theatre for Youth in the summer of 1995 with a mission to bring the art of theatre to children and families. The pair produces five to seven original shows and gives 250+ performances annually for more than 70,000 audience members at a variety of venues, including performing arts centers, schools, libraries, museums, and festivals. Visit www.atlantic-coast-theatre.com to learn more or to download a Study Guide for the performance.

The Reluctant Dragon is presented as the first of three productions for the North Charleston Cultural Arts Department’s 2019/20 Children’s Theatre Series. Other productions in the series include African Folktales by Bright Star Touring Theatre on February 5, 2020, and R.A.P. – Realize Anything’s Possible presented by Cutright and Ike Hill on April 1, 2020. All performances take place at the North Charleston Performing Arts Center, located at 5001 Coliseum Drive, North Charleston, SC 29418. Groups of 10 or more are asked to reserve space in advance. Seats fill up fast, so reserve early by calling the City of North Charleston Cultural Arts Department office at 843.740.5854. For reservation forms, directions, or information on additional programs and events, visit the Arts & Culture section of the city’s website.