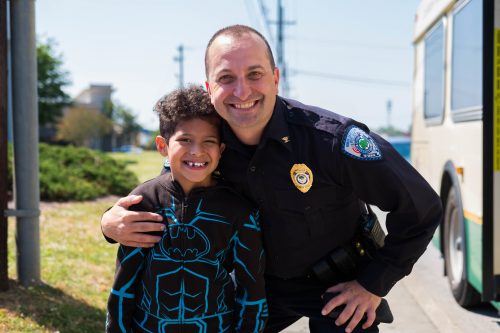 A North Charleston native and a 24-year veteran of the Department, Assistant Chief Gomes ascended through the ranks, first biding his time at the Police Department’s Radio Shop until eligible for the S.C. Criminal Justice Academy where he graduated with Honors.  As a newly sworn officer, Gomes began his career in the Uniform Division then moving onto the Police and Community Team (PACT), a team which Gomes believes strengthened his belief that the community and police partnership is instrumental to effective policing. From 2001 to 2013, A.C. Gomes worked in Narcotics and Investigations where he succeeded as a Corporal, promoted to Sergeant, then Lieutenant even being recognized as the 2006 Federal Drug Enforcement and Administration (DEA) Task Force Officer of the Year.

In 2013, A.C. Gomes was promoted to Captain over the Office of Professional Standards (Internal Affairs) where he implemented wide sweeping policy and procedural changes to restore and improve public trust through thorough reviews of the agency processes and transparency. A.C. Gomes was promoted three years later to Deputy Chief over Compliance and Standards Division, which allowed him to incorporate proactive education and training, recruiting and hiring to implement these same principles.

“When you look around the North Charleston Police Department, Greg Gomes has stood out as an individual who intimately understands police work, who has shown remarkable compassion and interest in working directly in the community, said Chief Burgess. “In North Charleston, we ask our officers to be more than enforcers of the law, we ask our officers to be community builders, and I know that Greg Gomes is the embodiment of that sentiment.”

“Greg Gomes is wholly dedicated to the City of North Charleston.  He is well qualified for the job, but more importantly, he cares deeply about the citizens of our city and their wellbeing,” said Mayor Keith Summey.  “Throughout his career, Greg has been focused on building relationships within the community, and as Assistant Chief he will only further facilitate those efforts spanning 24 years.  Our city owes a debt of gratitude to David Cheatle for his years of service to our community, and his outstanding professionalism that has led to an exceptional North Charleston Police Department.”

“I am excited for the opportunity and eager for the task at hand,” said Assistant Chief Greg Gomes.  “As throughout my career, I pledge to the citizen of North Charleston to continue working on their behalf to make our city an even better place.  Our Police Department is here to serve our citizens, and I’m energized to continue doing my part to build upon the work we have accomplished so far.”