The City of North Charleston’s Cultural Arts Department is pleased to announce that mixed media works by Steven Bleicher of Conway, SC, and the artistic duo Elizabeth / Sidebotham of Chicago, IL, will be on exhibit at the North Charleston City Gallery from April 1-29, 2019. The concurrent solo exhibitions are free and open to the public. 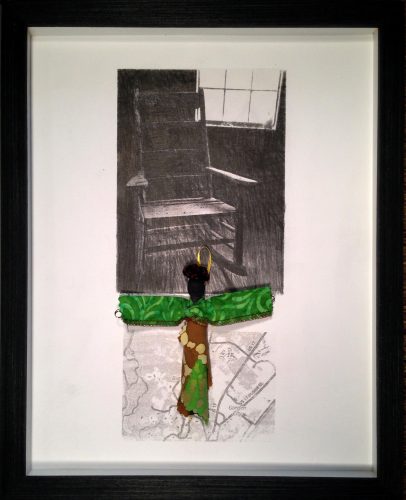 Steven Bleicher’s work deals with America’s fascination and mythology of “the open road,” specifically the country’s great highway systems. In Southern Stories of the King’s Highway, he presents a series of intimate mixed media assemblages that encapsulates the migrative sense of being on the move through The King’s Highway; specifically, the areas that extend to Florida, Georgia, and North and South Carolina. Heavily influenced by the coastal landscape and roadside attractions from the past and present along the famed highway, Bleicher’s photorealistic graphic renderings developed from site sketches and photographs are complemented by metaphorical elements such as maps to signify the journey, as well as found objects from the area. “The King’s Highway is not just a place; it is a state of mind,” Bleicher explains. This state of mind is at the core of our “American psyche, culture, and history,” serving as a reminder of the nascent beginnings of our nation.

Steven Bleicher is a South Carolina native, residing in Conway. He received his B.F.A. and M.F.A. from Pratt Institute in New York. His pieces have been included in numerous major collections along with being widely exhibited both nationally and internationally. He has also collaborated on a permanent public art installation with Jennifer Wen Ma called Man and Nature in Rhapsody of Light at the Water Cube, located in Beijing, China. Apart from being an artist, Bleicher is also an educator. He is currently a tenured professor and the director of special programs and projects for the Thomas W. and Robin W. Edwards College of Humanities and Fine Arts at Coastal Carolina University. Learn more about the artist at stevenbleicher.com. 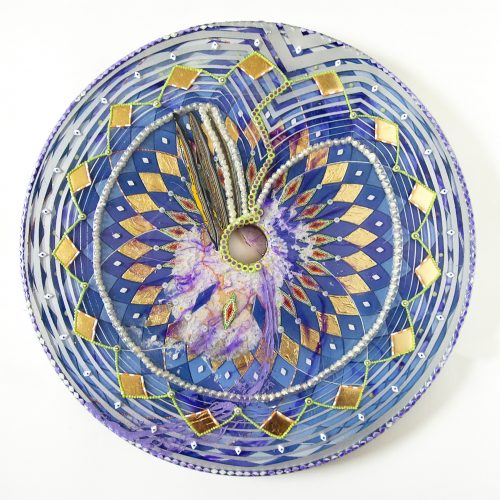 Better Together is an exhibit created by husband and wife duo, Erin Elizabeth and Harry Sidebotham II–more commonly assuming the identity of Elizabeth / Sidebotham. Erin is a conceptual artist that explores unconventional materials, such as cake and sprinkles paired with gold leaf, to address questions of banality, celebration, and experiential value. Her counterpart, Harry, is a painter that utilizes traditional media and techniques to delve into scientific theories such as parallel dimension theory. Together, Elizabeth / Sidebotham create kaleidoscopic artwork infused with mediums ranging from acrylic, sprinkles, and frosting, to gold leaf and resin, tying the traditionally ordinary with the non-traditional eclectic. According to the pair, the abstract mixed media works featured in Better Together serve as a reflection on “the sacrifices, challenges, freedom, and joy of parenthood.”

Elizabeth / Sidebotham live and work in Chicago, IL, where they both received their BFAs from The School of the Art Institute of Chicago and MFAs from Illinois State University. Elizabeth’s work has been featured both nationally and internationally in solo and group exhibitions, such as Dittmar Memorial Gallery at Northwestern University, and the Limerick School of Art and Design in Limerick, Ireland. Sidebotham has gained recognition from solo exhibitions at Happy Gallery and NYCH Gallery in Chicago, along with being featured in New American Paintings. He was also a finalist and the regional winner of the Bombay Sapphire Artisan Series. Learn more about the artists at erinelizabethprojects.com and harrysidebotham.com.

The North Charleston City Gallery is situated in two corridors of the northwest corner of the Charleston Area Convention Center, located at 5001 Coliseum Drive in North Charleston. Parking and admission are free. Gallery attendant hours are Tuesdays 12-5pm, Wednesdays 11am-5pm, Thursdays 11am-7:30pm, and Fridays 11am-5pm.  Inquiries regarding the artists or purchase information may be directed to the North Charleston Cultural Arts Department at (843)740-5854. For information on additional exhibits, programs, and events, visit the Arts & Culture section of the City’s website.