The City of North Charleston Cultural Arts Department is proud to announce the appointment of painter Daryle Halbert as Artist-in-Residence (AIR) for 2015/16. The City’s AIR serves as a key resource for the department’s outreach programs, especially in the area of art instruction. The selected artist shares his/her unique skills, talents, and experiences by providing services to senior groups, public schools, group homes, and various other groups within the city limits of North Charleston. Halbert will be available for visual art residencies of 12-15 hours at a minimum of two hour increments at North Charleston schools and is also available to host workshops for community groups of all ages. 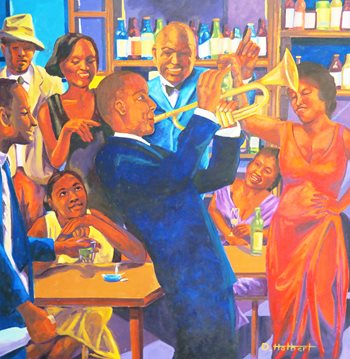 Halbert was born and raised in Detroit, MI and received his B.F.A. there from The Center for Creative Studies in 1990. He went on to earn an M.F.A. at Howard University in Washington, DC in 1996, creating many public murals during his studies. Following a four-year career as a graphic designer for Tower Records and Video in Washington, DC, Halbert relocated to Philadelphia, PA, where he became an active member of the arts community through exhibiting his work in local galleries and teaching art at the Renaissance Advantage Charter School. In 2002, he completed an AIR program at the Vermont Studio Center in Johnston, VT, and later, in 2009, completed the Philadelphia Mural Arts Program. Halbert moved to Charleston, SC in 2011 and is currently a member of the Charleston Artists Guild.

Since moving to Charleston, Halbert has become very interested in the rich African American history and culture of the South Carolina and Georgia Lowcountry. His most recent paintings depict scenes of Lowcountry cuisine, agriculture, music, and folklore. He views his work as a means to educate and inform and is passionate about inspiring others to develop their artistic talents.

The North Charleston City Gallery will host an exhibition of Halbert’s work throughout January 2016. The gallery is located within the Charleston Area Convention Center at 5001 Coliseum Drive in North Charleston. School liaisons, arts teachers, and the general public are invited to meet the artist at a free gallery reception on Thursday, January 7, 2016 from 5-7 p.m.

Art teachers and school liaisons may initiate the request for FREE services by the AIR by contacting the North Charleston Cultural Arts Department at (843) 740-5851. Community groups are also welcome to submit requests, which will be considered on a first come first served basis. All project requests should be placed at least two weeks in advance, with residences completed by the end of May 2016.