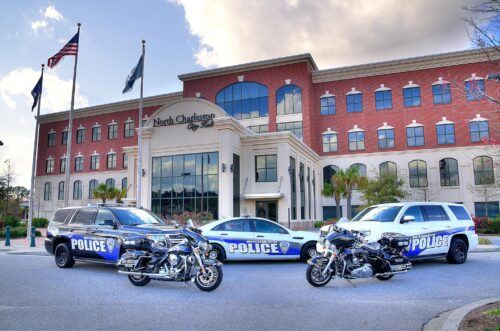 Please join NCPD in congratulating several of our officers for catching suspects in the act of two business burglaries about 30 minutes apart. Just before 4 o’clock this morning, officers arrested Ernest Wayne Canup for breaking into the Goodwill on Eagle Drive. A security company directed officers to the suspect’s location inside the business. Sgt. West saw the suspect running towards the rear of the property. Ptl. Bonnell and Ptl. Goodnight were able to locate the suspect near the bay doors and take him into custody without incident. Canup is charged with burglary second degree.
Just before 4:30 a.m., officers arrested a 16-year old boy for trying to break Tanger Tobacco and Vape on International Boulevard. Officers responded to an alarm at the business. Officers saw a hole broken in the front glass. Ptl. Bloomer followed the suspect and with assistance from Ptl. Winn, took the teen into custody. The suspect had cuts consistent with placing his hands through glass. He was charged with attempted burglary and released on custodial promise.