In support of the teams, a fundraiser BBQ is being held in Park Circle at the Felix Davis Community Center on Thursday, July 27, noon – 6pm. 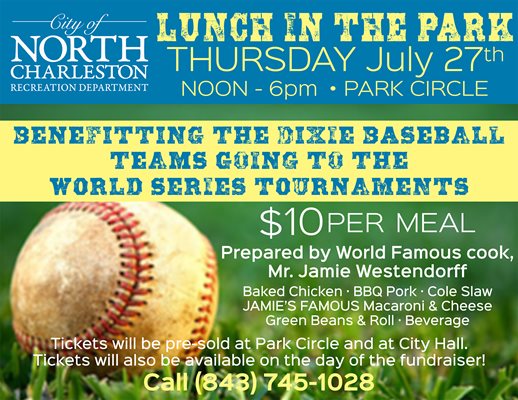 The road to the World Series

The North Charleston 15U baseball team completed an undefeated run through the 2017 Dixie Baseball State Championship held at Collins Park.  The championship is their 2nd straight title in this division.

The team defeated the Mt. Pleasant team in by a score of 11-2.  After jumping out to an early lead, North Charleston’s pitching staff held Mt. Pleasant to just a few hits to capture the win.  In Game #2 they faced the team from Gaston, SC and came away with a 15-0 win in three innings.  In the Championship, the North Charleston faced Mt. Pleasant again and put some runs on the board early and often to capture the title with a 15-0 win.

With the State Title secured, the team will travel to Independence, LA to participate in the World Series tournament.

In at Charleston Southern University, they faced North Myrtle Beach.  In a high scoring game with plenty of action, North Charleston came away with a 12-8 win.  In Game #2 they were up against the Central Pageland All-Stars. They jumped out to an early lead and had some very good pitching to come away with a 12-2 win.  Later that same day, Williamsburg County would be there Game #3 opponent.  In a very tight ball game, North Charleston managed to scratch two runs across the plate to take the victory, 2-0.  In the Championship game, they would again face Central Pageland in a very close game.  After 5 scoreless innings for both teams, North Charleston was able to get two runs on the board in the top of the 6th inning and hold on for the 2-0 championship win.

They will advance to the World Series tournament in Guntersville, AL.

In they faced a local opponent from Summerville, SC.  The first 3 innings proved to be a tight match-up and then North Charleston broke the game open and cruised to a 9-0 win.  In Game #2 they faced Gaston, SC and won a closer game, 7-2.  The Championship game was their next one and they got a few timely hits and some good pitching to win the title 12-6.

The team will head to Monroe, LA to defend their World Series title.

The team will play in Oxford, Alabama on Saturday, August 5at 8:00pm against Florida.