In observance of Fire Prevention Week the North Charleston Fire Department will hold its largest public education event of the year on Saturday, October 15th.

The Family Fun Day at the North Charleston Fire Museum will include the display of fire apparatus and emergency vehicles from throughout the Tri-County area.  It will include child care seat checks by certified technicians, a home fire sprinkler demonstration as well as many other fire and life safety displays and information.  This event is free and the North Charleston Fire Museum will provide free admission. 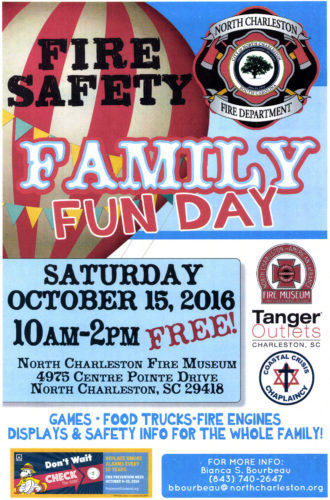 According to the National Archives and Records Administration’s Library Information Center, Fire Prevention Week is the longest running public health and safety observance on record. The President of the United States has signed a proclamation proclaiming a national observance during that week every year since 1925.