HomeNewsFire Chief takes to the road with fallen firefighters in mind

Chief Bulanow has canceled his trip due to Hurricane Matthew.

The following is a message from North Charleston Fire Chief Greg Bulanow.

This year the North Charleston Fire Department’s Honor Guard will once again travel to Emmitsburg, MD to participate in the National Fallen Firefighters Foundation’s, (NFFF) Memorial Weekend.  The NFFF’s mission is to honor and remember America’s fallen fire heroes, provide resources to assist survivors and work to reduce Firefighter deaths. Every October for 35 years the NFFF sponsors the official national tribute to all Firefighters who died in the line of duty during the previous year. Thousands of people from across the country attend the NFFF Memorial Weekend.  We are proud to support the NFFF and I know that our Honor Guard will represent us extremely well at this national event.

I also plan to travel to Maryland for Memorial Weekend.  I’ll be participating in the Red Helmet Ride, an organized motorcycle ride that provides a show of support for this event.  It begins south of Baltimore and ends with a wreath laying ceremony at the National Monument to fallen Firefighters in Emmitsburg.  The motorcycle I’ll be riding has a special story behind it that I wanted to share. 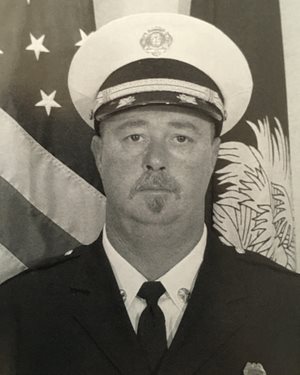 I’ll be riding a custom Harley Davidson that was owned by Battalion Chief David Bourne who retired from the North Charleston Fire Department in 2007.  Chief Bourne was a legendary figure in the NCFD who was highly respected as a fire officer and deeply loved as a man.

Chief Bourne served as a mentor to me and gave me opportunities that I would not have had without him.  Chief Bourne gave me my first chance to serve as Acting Battalion Chief when I was still a very young Captain and he took the time to show me the ropes.  When we worked fires together he would provide criticism that was sometimes harsh but helped me to get better.  He also made arrangements for me to attend class during the two years I was in grad school.   Whether it was what he taught me himself or what learning opportunities he allowed me to get, Chief Bourne played a key roll in my career development.

Chief Bourne and I often talked about motorcycles.  That was perhaps an odd topic of conversation because neither one of us owned a bike.  I had sold my last bike in the late nineties and family obligations kept me from getting another one.  Chief Bourne didn’t own a bike either but he hoped to buy one after he retired.  I often thought he had good taste in bikes, which is to say it was similar to mine.

Chief Bourne retired in 2006 and it was soon after that when I saw him on a series of different bikes.  I have a very clear memory of him pulling up one day on his new Harley Davidson.  This bike had been heavily customized as a tribute to his beloved profession of firefighting.  It was red, of course, with chrome flames visible from every angle and decorated with hand-laid gold leaf in the style of an antique fire apparatus.  It was beautifully done.

Chief Bourne was justifiably proud of that bike and he loved to show it off, especially to groups of Firefighters.  He would often attend static displays and fire prevention events.  He even started an annual charity ride in honor of the first responders lost on 9/11.  He seemed to be enjoying himself and it made me happy to see him doing what he had always wanted to be doing after he retired.

Soon after seeing him on his new Harley I got word that Chief Bourne had cancer.  It was lung cancer and very advanced by the time it was discovered.  Within a few months he was dead at the age of just 53.

Chief Bourne had requested a fire department funeral and the church was packed with Firefighters in their dress uniforms interspersed with bikers in theirs jeans and leathers.  Chief Bourne was eulogized by Teddy Smith, his fellow Battalion Chief who worked with him for many years.   Chief Smith shared story after story and had us all alternating between laughter and tears.  He offered a beautiful tribute to his friend, the type of friendship that perhaps can only be found among Firefighters.

Chief Bourne left his beloved motorcycle to Chief Smith who has maintained it in pristine condition.  I was honored when Chief Smith asked me to ride the bike to lead the 9/11 ride, the ride that has now been named the “Chief David Bourne 9/11 Memorial Ride.”  Chief Smith has encouraged me to ride it to other local Firefighter events as well but I was unsure that he would let me take it all the way to Emmitsburg.  However when I asked him, Chief Smith immediately agreed.  “The bike was meant to be ridden,” he said, and so I planned this trip.

I’ll leave a few days before Memorial Weekend on a scenic route that includes the entire Blue Ridge Parkway on the way north and the Outer Banks on the way back.  Solitary travel on a motorcycle is conducive to contemplation and I know I will think often of Chief Bourne.  As much as I will enjoy the ride it will be with a sense of sadness because I know it should be him.  He should have gotten more time to enjoy his dream.

Unfortunately, Chief Bourne’s fate is increasingly common.  Firefighters survive a career of selfless and devoted service only to succumb to a cancer diagnosis and an early death.  I also had a brush with cancer in 2013 but was fortunate that it was found and successfully treated very early.

The fire service is grappling with the increased risk of cancer and developing best practices to protect firefighters.  In addition to eliminating tobacco use and using respiratory protection, we are now also learning the importance of decontamination procedures that can reduce repeat exposures to carcinogens. The South Carolina State Firefighter’s Association, (SCFFA) has developed a series of posters with the purpose of communicating these important messages to Firefighters across our state.  This focus can help ensure that Firefighters will not only survive their careers but live to enjoy a long and healthy retirement as well.

I’m proud that the North Charleston Fire Department will be participating in Memorial Weekend and the Red Helmet Ride to honor the memory of America’s fallen Firefighters. We are proud to support the work of the NFFF, SCFFA and many other groups who work to improve Firefighter health and safety.  I’ll be sharing some of the best practices that the SCFFA is promoting as well as pictures from along the way as I travel to and from Memorial Weekend.  Perhaps the best way to honor the dream of a Firefighter gone too soon is to work to try to ensure the safety and health of others Firefighters.

Chief Bulanow recognizes that operating a motorcycle involves an inherent level of risk and uses the following safety equipment and procedures: