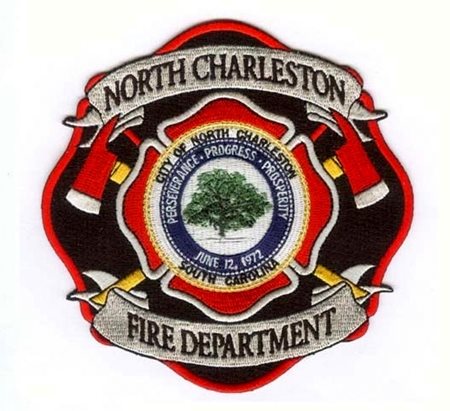 A patch is an important representative symbol and point of pride for a fire department. It features prominently on uniforms, apparatus, signs, letterhead and sometimes even tattoos. Firefighters from different fire departments often exchange patches in an act of camaraderie and brotherhood.   The most basic purpose of a patch is that it should identify those that wear it to those they serve. It should also distinguish those who wear it from other agencies with whom they may work. Ideally it should also feature symbolic elements that represent the identity of the organization. In the course of time, events may transpire that may provide cause for a fire department to change the design of their patch.

This has occurred before in the history of the North Charleston Fire Department (NCFD). My understanding is that the NCFD’s current shield-shaped patch was designed by Chief W. Frank New, who served as Chief during the split from the North Charleston District Fire Department in 1972. The creation of two distinct entities, the “City” and the “District”, necessitated that each department have their own patch. The shield-shaped patch prominently featured the city seal in its design. After 24 years apart, these two departments rejoined on April 1, 1996. This date is also important for me personally because it is the day I began my career with the North Charleston Fire Department. For 14 years I have worn the shield-shaped badge on my shoulders with enormous pride in the privilege that I have to identify myself as a member of the NCFD.

In 2009 the City of North Charleston changed the city seal from the design featured in the NCFD’s patch, thus making it obsolete. This change provided the opportunity to consider a fresh design for the NCFD’s patch. I am pleased to present the new patch for the NCFD. The bold design is rich in symbolic significance.   The new city seal is the center point of the design because protecting the quality of life in North Charleston is central to our mission as a department. The city seal is framed by the Maltese cross, and the Maltese cross outlines the patch itself. This ancient symbol representing courage reflects our proud heritage that dates back to the knights of the Middle Ages and it immediately identifies us as firefighters. Crossed pick head axes complete the design. While firefighters have many tools to use at all types of emergencies, none is more versatile than the pick head axe. Used for striking, chopping, cutting and prying the pick head axe represents the versatility required of a 21st century firefighter.

I’d like to thank Assistant Chief Trey Coker for designing our new patch. As a second generation firefighter and a career veteran of the NCFD, he approached this task with meticulous attention to detail, sensitivity and great pride. We will soon begin the transition to our new patch that will represent the proud men and women of our department into our bright future.