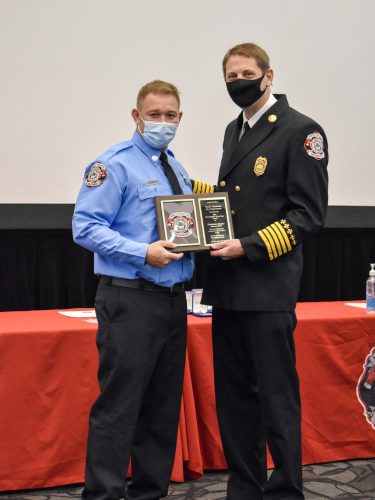 NCFD is proud to announce the 2020 Firefighter of the Year was awarded to Engineer Nick Sooter.

“Engineer Sooter has been a member of NCFD since January 2013. His pride and ownership of his job as a driver/operator, in addition to his responsibilities as a SCBA technician, a member of the dive team, and a member of the recruitment and retention committee, display the fire department’s value of honor. Honor as defined “to live up and carry forward the noble traditions of our profession.” Engineer Sooter has a deep- rooted need to help others, and this has been evident in the level of compassion that he shows them. He has bought food and clothing with his own money to give to people in need, brought in food to share with his co-workers, and volunteers his time as a youth sports coach.
Engineer Sooter embraces the traditions that come with the job, the biggest of which is the family environment. He comes from a family with deep roots in the fire service and holds our traditions in high regard. As is fire service tradition, he is diligent in his pursuit of knowledge and always learning new techniques and skills. Station 2, B-Shift works together to ensure new members have the resources they need to succeed and understand North Charleston Fire Department’s history and traditions. One of those traditions is station pride. At Station 2, Engineer Sooter has station pride that fosters a competitive environment, resulting in hard work from everyone and strong bonds of friendship.
He is always professional in his dealings with automatic aid partners and shares ideas and information with them during training and after incidents. He is courteous and helpful to the people he encounters during incident response.
Engineer Sooter has mastered the job of Driver/Operator and works diligently to ensure that the trucks and equipment are in the best condition possible. This year has been particularly challenging, due to the age and condition of Tower 202. The crew has been in and out of reserves for a large portion of the year, and he maintains the same high standard with those apparatus as he does with his front-line apparatus. Regardless of the time required, he will not rest until he is satisfied in the status of his apparatus and equipment. He involves other members of the crew to help them develop into drivers themselves and to make sure that they are aware of our high standards.
Engineer Sooter is a qualified SCBA technician and conducts maintenance and repair of our SCBAs. He has been involved with the department SCBA program for a number of years. He works with vendors securing quotes, scheduling tests, and works with Scott SCBA reps to provide us with training and updates. On multiple occasions, he has not only repaired and maintained our breathing apparatus but found ways to do so that worked within budget constraints and saved the department money. He has stepped up as a leader and provides valued information and opinions regarding the status of the SCBA program. His knowledge of the SCBA standards and changes has been very helpful in planning for the future. Engineer Sooter’s dedication and commitment to the SCBA program is greatly appreciated. His help has been vital to logistics and the department’s success.
For these reasons, I am pleased to recognize Engineer Nick Sooter as the North Charleston Fire Department’s 2020, Firefighter of the year.” 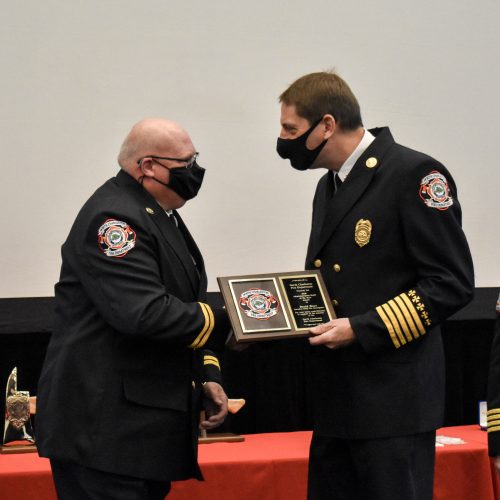 NCFD is proud to announce the 2020 Administrative Staff of the Year was awarded to Battalion Chief David Biser.

“Battalion Chief Biser joined the North Charleston Fire Department in August 2019. He came to us with a full fire service career and police experience that started in 1985. He served as a volunteer firefighter with Union Fire Protection District for 32 years, a police officer for New Haven Police Department for 11 years, a full-time firefighter with the Eureka Fire Protection district for 27 years, and a Missouri State Fire Investigator for 2 years. He is a IAAI Certified Fire Investigator, Paramedic, hazmat technician, rescue technician, and rescue specialist.
In under two years with the North Charleston Fire Department, he has investigated over 85 fires and has managed the Fire Investigation Division with two fire investigators. While conducting investigations, he has created beneficial partnerships with other local fire investigators, North Charleston Police Department, and the South Carolina Law Enforcement Division. Battalion Chief Biser has made it a practice to seek out firefighters that were first on scene and provide additional information on their fire. He reviews the fire’s growth, development, and extinguishment. Then he reviews his investigation, including the area of fire origin and fire cause. This has provided direct feedback to firefighters on their impact and an increased understanding of fire investigations.
Battalion Chief Biser embodies the North Charleston Fire Department values of honor, courage, and compassion. He has served his local community as a fire service professional for over 35 years. He shows compassion in his every day actions with coworkers and the community. Finally, his commitment to providing fire investigation education to the department has increased everyone’s knowledge and understanding, ultimately improving our fire service.
For these reasons, I am pleased to recognize Battalion Chief Fire Investigator David Biser as the North Charleston Fire Department’s 2020, Administrative Staff member of the year.”