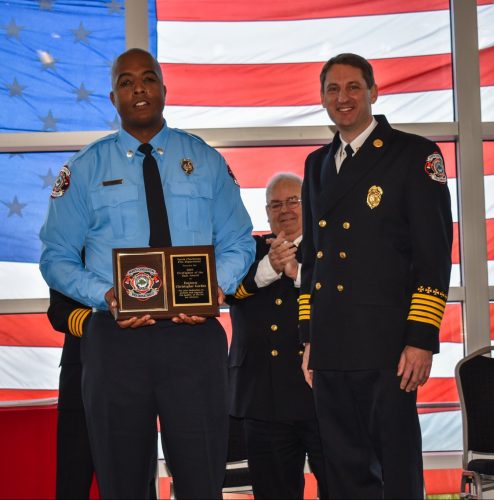 Congratulations to Firefighter Christopher Gordon for being named Firefighter of the Year for 2019.  Chief Bulanow, in his memo, wrote the following:

“According to the Officers in his chain of command, Engineer Chris Gordon is a leader within his assigned station.  He puts forth time and effort to assist his coworkers with learning skills to be successful in their careers.  In addition, Engineer Gordon commits countless hours assisting youth within his community and beyond. Engineer Gordon has a way of connecting with people, both young and old; to interact and find ways to encourage, reassure, and even provide basic needs. He is always willing to help someone, no matter what their situation.

Engineer Gordon has become a preferred volunteer partner with the City of North Charleston Recreation Department. He has made an impact and connection with several members of Club Horizons and has played along side them during kickball and basketball games. They know him by name, and appreciate his caring, coaching attitude during these games. Engineer Gordon also volunteers at the Charleston Boxing Club, a non-profit organization that provides a safe haven for youth while teaching them self-discipline, commitment, respect, and hope. He is a coach and mentor to many kids who go through the club, teaching important life skills with physical training and boxing techniques. He also serves as the Secretary for the Charleston Metro Fraternal Order of Leatherheads Society, or FOOLS. The FOOLS mission is to improve the brotherhood of the fire service through training and community outreach.

Earlier this year, Engineer Gordon was nominated for Employee of the Month for the shoe drive he organized for under-privileged youth and homeless in the local area. In January, his shoe drive concluded with approximately 100 pairs of shoes given to a local church. The local church distributed the shoes through a community outreach program. Because of his efforts, citizens received a basic need that they would not have otherwise. He has repeated this shoe drive this holiday season, and has already surpassed the number of donations from last year.

Engineer Gordon has displayed compassion and dedication to his community by volunteering his time and making an effort to improve the quality of life for North Charleston citizens. For his consistent demonstration of our organizational values, I am pleased to recognize Engineer Christopher Gordon as the North Charleston Fire Department’s 2019, Firefighter of the year.” 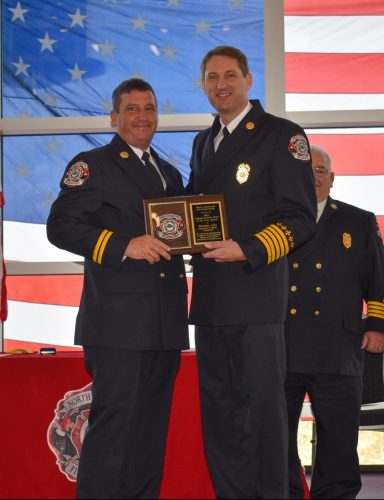 Congratulations to Logistics Support Thomas Alix for being named Administrative Staff of the Year for 2019.  Chief Bulanow, in his memo, wrote the following:

Tommy plays an important role as a member of the logistics team, supporting the fire department’s mission, vision, and values every day. His experience in the role of a firefighter, engineer, captain, and battalion chief provide an intuitive knowledge of what needs to go where and when. He understands the balancing act of maintenance and repair while providing continued service to our citizens and visitors. He is committed to keeping stations, apparatus, and equipment in service, and truly maintains our level of service by keeping these essential parts of our service ready and working.

Unlike many organizations, we provide service 24 hours a day, 365 days a year. This means things break all hours of the day and days of the week. Tommy has proven that he too, provides service 24 hours a day, 365 days a year. One hot summer evening, on the weekend, Tommy came in and stayed until the early morning hours to provide a crew with air conditioning after their normal unit failed. On another weekend, Tommy came in to assist the crew of Tower 201 with a mechanical problem. Tommy and the crew were able to make the repair and keep the apparatus in service. While repairing the problem, he noticed an issue with a steer tire on the apparatus that could easily be missed during normal check offs. He decided to get the tire replaced for safety reasons. His awareness and decision to do this likely prevented a failure of the tire, which could have resulted in Tower 201 losing control while driving, putting firefighters and other drivers at risk for injury and serious damage.

Tommy continues to demonstrate his willingness to make the extra effort required to get the job done. He has proven his commitment to the well-being of the City of North Charleston, the North Charleston Fire Department, and fire department personnel.

For these reasons, I am pleased to recognize Logistics Support Thomas Alix as the North Charleston Fire Department’s 2019, Administrative Staff member of the year.”

News and Emergency Alerts in your inbox!